Listen in as John Belizaire, CEO at Soluna Computing and Lee Taylor, CEO at REsurety discuss the challenge of intermittency in the renewable energy market. The podcast covers REsurety’s impact on the clean energy economy through their innovative tools like Locational Marginal Emissions (LMEs) and hedging strategies.

The Clean Integration Podcast features experts in the renewable energy industry discussing the path to making renewables the primary, most affordable energy source. The podcast is sponsored by Soluna, a utility-scale developer that combines renewable energy power plants with high-performance computing facilities. 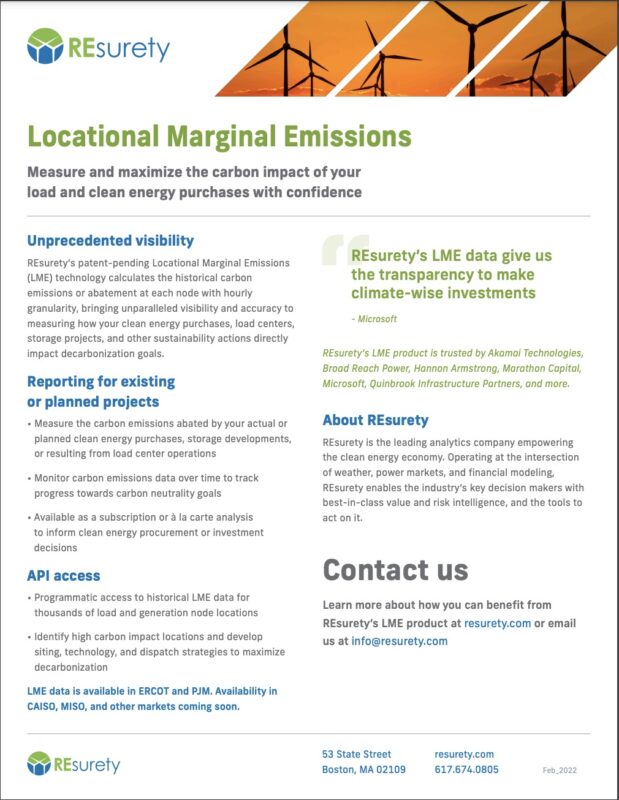 Download REsurety’s product brochure on locational marginal emissions to learn more about the product offerings and uses of this innovative, carbon-tracking technology. 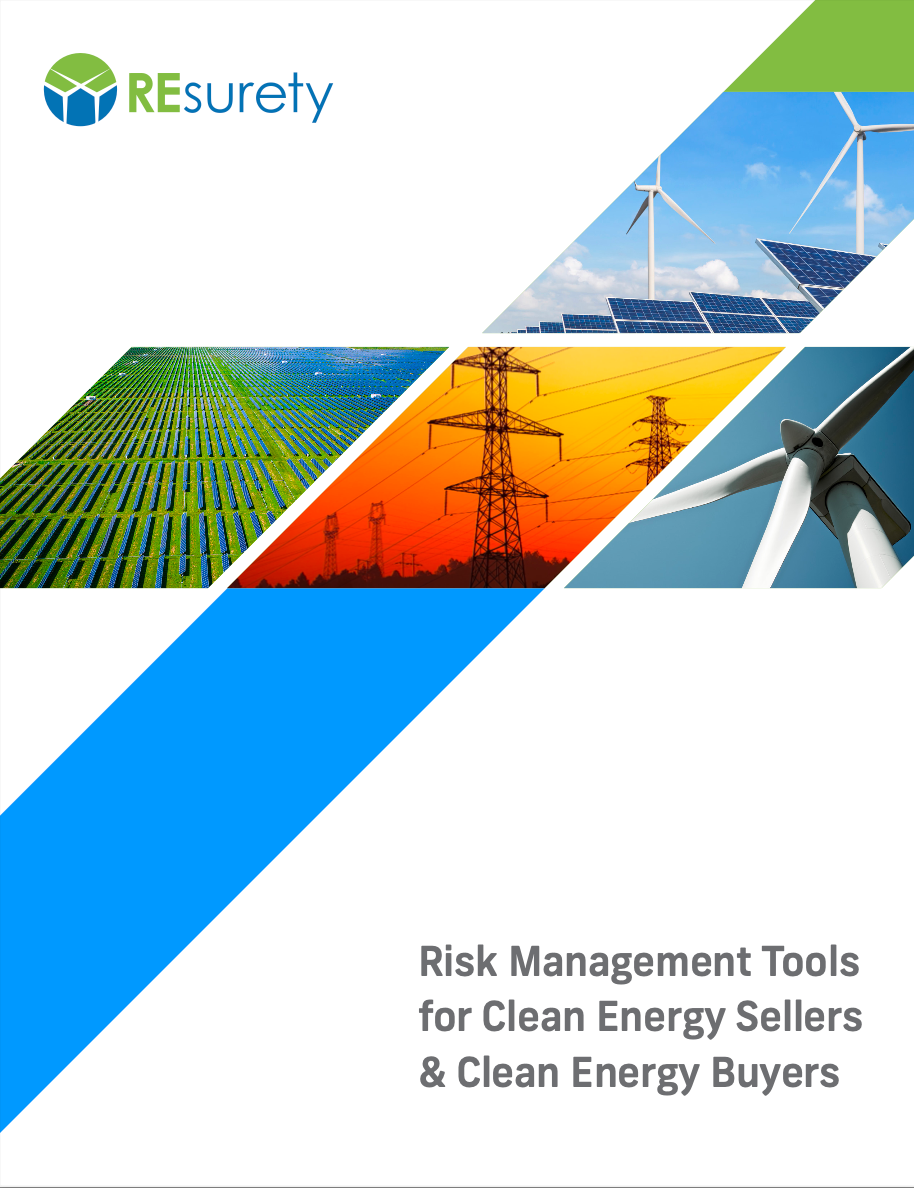 This brochure outlines: REsurety’s Experience; Tools for Energy Sellers including power purchase agreement, revenue swap, and balance of hedge; Tools for Clean Energy Buyers including settlement for guarantee agreement and volume firming agreement; and Settlement Index Options. Fill out the form below to download.

First used with wind projects, a pgPPA manages weather-related risk by settling a facility’s energy transfer based on a proxy generation index, rather than on actual metered generation. Operational risk shifts from buyer to seller.

An innovative financing deal is the latest evidence that solar is entering the mainstream among big institutional investors.

In simple terms, a pgPPA is a renewable energy contract designed to manage weather-related risk. In practice, it settles energy transfer from a facility based on a proxy generation index, rather than on the metered generation. That means proxy generation is an hourly index that determines the volume of energy that a project would have produced if it had been operated as specified by the developer or owner.

The arrangement hinges on both the owner and the offtaker agreeing on a set of weather metrics to establish the proxy generation component. In the case of Lightsource bp’s Briar Creek facility, REsurety Inc. will serve as the calculation agent over the life of the contract.

The pgPPA reflects the fact that solar “can stand on its own two feet” and not be so tied either to a purchase power agreement or public policy directive, said Lee Taylor, REsurety’s founder and CEO in an interview with PV Magazine USA.

Taylor said that the pgPPA structure emerged a few years ago in the wind energy sector, and variations are common in agribusiness, as well as ski resorts, among other weather risk-related markets. One of the technique’s first uses in renewable energy was with the 178 MW Bloom Wind facility in Kansas, part of the Southwest Power Pool. U.S. Capital Power operates Bloom Wind under a 10-year fixed price contract with Allianz Risk Transfer that covers 100% of the project’s output.

Under the contract, signed in 2016, Capital Power swaps the market revenue from the wind project’s generation for a fixed annual payment over a period of 10 years. The agreement secures long-term predictable revenues and mitigates generation volume uncertainty related to the intermittent nature of the wind resource.

Taylor said that similar structures have been used on wind projects in PJM and ERCOT in the U.S., as well as in Australia. The Briar Creek deal is considered to be the technique’s first use in a U.S. solar project.

“This deal is a great example of the evolution of renewable energy products here in the U.S.,” said Kevin Smith, CEO of Lightsource bp in the Americas. He said that innovative power contract structures such as virtual and pgPPA’s are “valuable tools we can leverage to meet the needs of our corporate partners, manage risk, and continue to finance and build new solar projects.”

Purchase power agreements are commonly used structures between a solar facility’s owners and an energy offtaker, often a utility or large manufacturer. In a variation known as a virtual PPA, contract terms focus on the amount of energy the facility delivers to the grid. Typically, the quantity is measured by an electrical meter at the point of interconnection. By settling the energy delivery at the interconnection point on an “as generated” basis, the buyer is exposed to a number of operational risks.

In a pgPPA, the focus is the amount of energy that should have been delivered to the grid had the plant operated according to equipment efficiency factors and operational best practices. The approach shifts operational risk away from the offtaker and onto the seller.

The pgPPA measures the actual wind or solar resource at the facility. It then runs that measurement through an agreed-to formula that estimates how many megawatthours should have been produced given the facility’s size and operations under best practice standards.

In the case of Briar Creek solar, REsurety is providing the hourly solar radiance data, which will be managed using PVsyst photovoltaic software.

The Briar Creek solar farm is about 40 miles south of Dallas, and is expected to start commercial operation at the end of 2021.

Reposted as in PV Magazine.

HAMILTON, Bermuda, Oct. 4, 2019 /PRNewswire/ — Nephila Climate, the weather, climate and ESG-driven specialty division of Nephila Holdings Ltd. announced the first use of a Proxy Generation Power Purchase Agreement (pgPPA) for the 180MW Heart of Texas (HTX) wind farm located in McCulloch County Texas being developed by Scout Clean Energy of Boulder, Colorado. Scout secured the pgPPA with Allianz Global & Specialty, Inc.’s Alternative Risk Transfer unit, in partnership with Nephila Climate. REsurety provided the risk analytics supporting the long-term offtake transaction and will serve as the calculation agent for the life of the contract.

The pgPPA is the newest structure in a suite of risk management tools that allows buyers and sellers of renewable energy to manage the risks created by weather-driven renewable energy. Unlike the Proxy Revenue Swap (PRS) (more than 2GWs of PRSs are currently deployed) which guarantees a revenue amount, the pgPPA guarantees a rate per MWh. The project therefore retains exposure to P50 accuracy. This structure provides the cashflow certainty the project needs to support financing but does not require the project to pay for the transfer of risk that it prefers to retain.

“The renewable energy landscape continues to evolve, with buyers and sellers of clean energy having to manage increasingly large and complex risks,” said Richard Oduntan, CEO of Nephila Climate.  “In response to that need, Nephila Climate’s goal is to provide a holistic set of risk management tools to the buyers and sellers of clean energy.  These tools enable our clients to pick and choose which risks they want to shed, and which risks they want to hold, which can change project by project. We’re delighted to be announcing the execution of this new structure with the Scout team a short few months after announcing our PRS transaction with them earlier this year.”

A pgPPA is essentially the same as the popular Virtual PPA, or “vPPA” structure favored by corporate buyers. The difference is that the contract settles on a Proxy Generation index rather than the observed or metered generation. Proxy Generation is an hourly index that specifies the volume of energy that a project would have produced if it had been operated as specified by the developer or owner. This settlement mechanism is required to establish aligned interests: ensuring that the offtaker doesn’t take on financial exposure to the owner/operator’s decisions, such as when to plan maintenance or to install upgrades.

“The success of structures like the Proxy Revenue Swap for project developers, and more recently the Volume Firming Agreement (VFA) for renewable energy buyers, clearly demonstrates that both buyers and sellers of clean energy are increasingly in search of tools to manage the volatility of intermittent generation,” said Lee Taylor, CEO of REsurety. “The pgPPA is simply the next iteration of a proven structure that enables each party to manage the risks that they are best equipped to hold.”

“We continue to break new ground with these innovative risk management structures,” stated Karsten Berlage, managing director, Allianz Alternative Risk Transfer (ART). “We are pleased to collaborate with the Nephila Climate and REsurety teams yet again for another ‘first,’ and to provide Scout with the revenue certainty they needed to launch construction of the project.”

Reposted as in PR Newswire