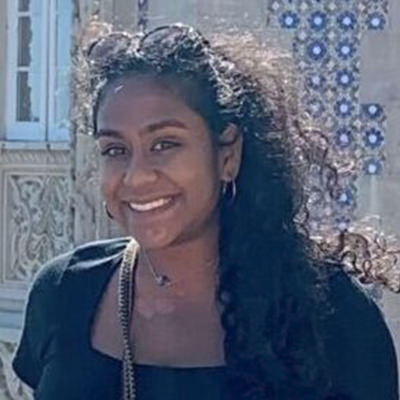 “I was very science and math oriented. And my favorite time of the year was the science fair.”

“The first memories I have of wanting to pursue a degree in engineering are from third grade. They gave us a huge book of career opportunities, and I was like, ‘Oh, chemical engineering sounds like a cool thing!’

“I was very science and math oriented. And my favorite time of the year was the science fair. One of my favorite projects was hot and cold pressure systems, that was in second grade. Buoyancy was third grade. Then in fourth grade I did molecules, how ionic bonds work, with the styrofoam balls and pipe cleaner diagrams of organic compounds. Yes, that was my favorite time.

“A tour across my county in Ohio was a pretty big influence on me wanting to go into renewable energy. My dad and I went and visited five or six farms to see how they installed solar panels on their barn sheds, and how it helps these very rural communities. I thought if my county could do it, anybody can do it.

“I did an internship during high school with an agricultural facility in my hometown that does biochemistry sorts of things. I assisted a professor in synthesizing bio fertilizer based on an algae component. In Ohio, there’s a lot of agriculture with chemical runoff that harms wildlife and the environment, so having something like an algae compound in the fertilizer gives a new perspective – you can take something natural and reproduce it to help the environment as well.

“After I graduated high school, I did a gap year in Taiwan. I didn’t know what I wanted to do and I knew for some friends the experience contributed to them recentering themselves, and learning a new skill. I told the program they could put me anywhere, since I had already been to Europe and South America, where most other students choose to go. I wanted to go to someplace I had never been.

“When you’re in a country where you don’t know the language, you really have to rely on other people. So it was all about building connections and gaining independence. Taiwan is a very homogeneous country and I always felt like a foreigner everywhere I went. No matter how well I learned the language and how well I could navigate the train systems, it was still hard to assimilate completely, but everyone in the country was really friendly.

“I went to Case Western Reserve University in Ohio, and pursued a degree in Materials Science and Engineering. There is a lot of focus on renewables, with a campus wind turbine and solar farm. I had never thought a wind turbine was related to material science, but along with being electrical and mechanical, materials do play a big part of that construction. So, it was kind of a case study on degradation over time for certain types of materials, polymers and some rare earth metals. It’s something I definitely wanted to contribute to, so I did a lot of research in those facilities during my undergraduate career.

“Through a Great Lakes Energy Institute program, I became an operations intern at EverPower, a company that monitored and maintained a fleet of wind farms across the U.S. For them, I designed a tool that visualizes operational performance over time. It was like an app – you choose the month or time you want to inspect, and it’ll go through all the turbines and see if there’s anything that was meaningfully different from the selected look-back period. So you can see if a temperature sensor could be broken, if speed sensors are misreading, things like that. It would send a plot after it finished running, that with the resource report, was produced to the operations team. So that was very useful in determining how I wanted to go into data analytics based on operations rather than a research role.

“I then got an internship at REsurety, and never left! We have jerseys with our employee number on them. When I joined I was in the 20’s but I bet I’m 8 or 9 in seniority now. So it’s like I’m almost up to CEO-level seniority!

“I joined the Diversity, Equity and Inclusion Steering Committee, and it has really put me in a position of learning and accountability, helping people in the company with promotion transparency or having a safe space to talk about social stressors and mental health. There is a lot of social justice fatigue, and sometimes it’s hard to bring the mindset into the workplace where people tend to compartmentalize. But when we add that perspective to our work community, it makes it feel like other perspectives are welcome and you are heard.

”Creating interpersonal connections is one of my stronger skills. Right now, I’m deep in data, more of a machine runner. So I look forward to being a manager, contributing to company culture, facilitating teams, and guiding younger generations as a mentor.”